No end to rugged country.  Monument Valley next: from SW Utah to SE Utah. 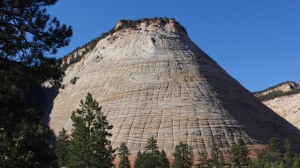 It’s out through a tunnel and onto the 2 lane blacktop world again.

What is this absurd picture doing here? (to borrow from Land without Bread). Suddenly it appeared in the middle of the desert.

Look below to see why this lake exists. 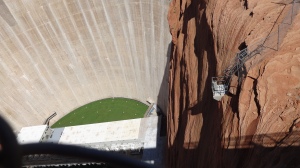 Glen Canyon dam. Bus loads of folks stream across the bridge to get a closer look.

Page is the town the workers on the dam lived in. It has at least dozen churches like this one, plus MacDonalds, plus the Blue Buddha, recommended but also closed.

The churches of Page line the main front one after another like fast food chains, competing for customers.

Time marches on. I wound up eating at a cantina that had its own power supply.

You can hear the burgers sizzling. 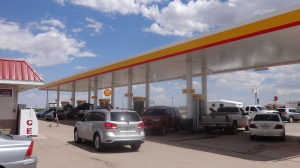 Even deserts have their gas.

There it is! Not the trailer but the first sight of Monument Valley.

These monuments take the breath away, even if you’re but one of hundreds pouring in. I headed over to Goulding’s Lodge where I had a room and jumped on the 3.5 hours “deluxe” tour, departing at 4pm, close to the magic hour.

I’ll be your guide today.

Note prominent profile on the right. Do you see him? Not John Ford. Alfred Hitchcock. Still looking for Ford.

A female hogan where we (all 3 of us on the tour) saw a demonstration of weaving and I chatted with Robert, our Navajo guide, who says the young people flee and no one builds hogans from logs anymore.

Saddles and monuments at one of our stops where we could also buy Navajo crafts.

See the “W”? Not the hotel chain, or that President, but it’s one of the more impressive monuments.

I’m glad I didn’t take my car on the tour. It’s all dirt, deeply rutted, standing water in places, and lots and lots of bumps, jolts and bangs. But worth it.  The more remote sites had a profound silence and magical aura of nature’s supreme power and the patience of milennia.

At dinner I surrender. Good good overall so far, but the preponderance of menu items features beef.  I order the filet mignon, am not disappointed and compensate with oatmeal for breakfast.

Tomorrow it’s on to Durango. Still looking for John Ford, though Robert says the local people invited him back after he retired for a banquet tribute as someone whose films remain iconic reminders of the sheer beauty of this country.