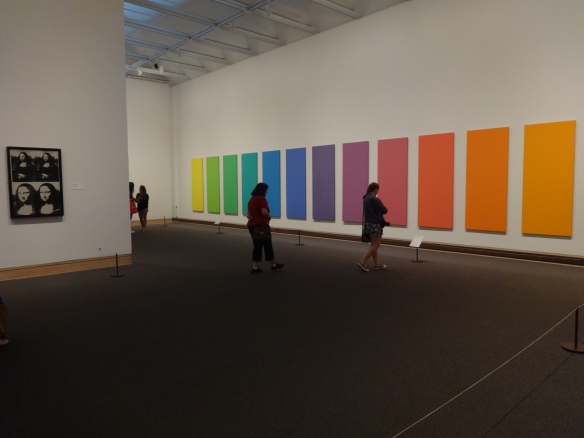 I may be the last person to compare the new MOMA and the expanded Metropolitan Museum of Art.  Much ballyhoo attended MOMA’s big expansion while the Met was adding here and there over the years and now, in 2013, the difference is spectacular: what was once a crusty, dingy, rather dark and dreary place, the Met, is the place to be and what was once the cutting edge of the provocative and new is now a disaster. A strong word for a great musuem but, in this case, deserving.

Ironically, my belated visit to MOMA coincided with a show on the work of Le Corbusier, one of the major pioneers of the modernist style of stripped down, no nonsense architecture.  Watching a video of him presenting his vision of a city of pencil like high rises separated by little more than lawns, I thought how sad it is that this notion has taken root so often: big, anonymous buildings with no distinctive character, access or amenties at ground level surrounded by a vast green desert of barren space.  His vision seemed demonic and one that came to fruition more from his own charismatic persuasiveness than the human scale and emotional appeal of his designs.  He must have mesmerized, if not intimidated, his clients into submission.

But did that happen to MOMA with Yoshio Taniguchi, the architect of the new monstrosity of its massive expansion? The space is grey, cheap in the small touches like flooring and signage, lifeless, vastly overcrowded with both vistors and objects, and without respite.  It is modernism architecture that has not learned from the postmodern upheavals that have, with playful and inventive turns, revitalized the field and given us buildings of grace, wit and elegance.  Taniguchi’s space has a monotonous, propulsive energy, sending the visitor onward in search of a moment of unhurried calm that never arrives. And where it is expansive, as in the passages that look down on the great atrium or the windows that look out on the sculpture garden and original MOMA buildings, it is entirely solipsistic: it looks at only itself. The rest of the city stands outside the gates.

And outside the gates but nestled securely in Central Park, stands the Metropolitan Museum of New York.  It has expanded mightily in the last decade or more but always with taste and subtlety. The enormous glass enclosed addition housing the remains of the Temple of Dendur is worth the price of admission alone (which is whatever one wishes to pay, above or below the recommended amounts!) and yet it is but one of the enormous number of special exhibitions and spectacular spaces we’re invited to take in.  Despite a crush at the entrance no less daunting than at MOMA’s, once inside the museum absorbs its guests into a calm serenity. Even the best attended exhibitions such as the current “Photography and the American Civil War” and the complementary “The Civil War and American Art” lack the propulsive move-along, don’t-linger, get-out-of-here energy of MOMA. And the standard gallery shows, such as the fabulous atelier-like space devoted to  contemporary art, take the breath away with their hospitality, audacity and beauty.  The image at the top of the Post is of Ellsworth Kelly’s Spectrum V, fills the entire wall of gallery 925.  And it is obvious from the photo that the energy is habitational, contemplative and serene compared to the frenzied pace of MOMA.  It’s possible to linger, ponder and absorb the magic of this simple but subtle work that simply could not be shown without a space of the kind the Met has created.

Enough said. I’m late to the show but it’s worth keeping thought, dialogue and recommendations of where to go and what to see, alive.