The de Young museum has a powerful collection of Keith Haring’s more political work. His familiar style can sometimes mislead one into thinking it’s a “one look fits all” type of work but these images grab the viewer by the lapels more often than not. 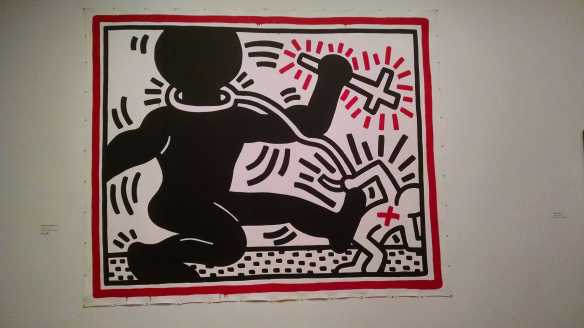 One of the best known of Haring’s political images

Striking is their scale and simplicity. Often made on tarpolins with store bought paint, and many dashed onto vacant advertising panels on New York subway trains, the images are stark and mesmerizing. Like the Aboriginal dream paintings that his repetitive use of symbols and icons resemble, the images transport us to a dream, or nightmare, world where ordinary humans are sujected to endless tortures, dismemberments and death at the hands of large, looming figures that are animalistic or machine-like more often than not.

The TV monster and the helpless man. The injunction to Kill your Television has come too late. Haring’s figures are captives and victims of forces they may have created but no longer control.

It can be easy to think of Haring as an “easy” artist: easy on the eyes, easy on the mind, easy, sometimes, on the pocketbook with his accessories, knockoffs and mass produced items, but a political motif runs vividly through this show, if not his oeuvre. He clearly finds little solace in the Great Society or the war in Vietnam, or Reagonomics or the continuing, and still continuing, racism, exploitation and media circus that surrounds him and that he both cultivated and subverted. 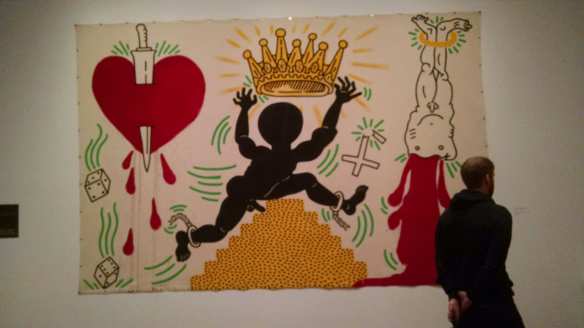 Elsewhere he associated the crown with Basquiat and here it seems to crown the central figure who leaps between a bleeding heart and headless body.

The museum gift shop is chock full of Haring-abelia for the acquisition minded, but the real gift is in the work itself. It haunts and moves and provokes and reminds us that there is a dignity in the gesture of resistance, of a great refusal of that which is everywhere celebrated and normalized… until it isn’t. 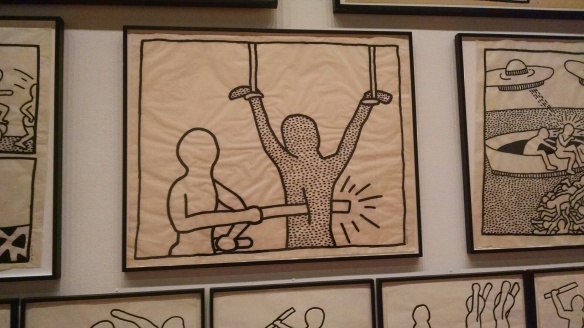 Some images are dense with iconic doodles and some have the starkness of a Philip Guston anti-KKK painting or Guernica. This is one of them.

The retrospective of Diebenkorn’s work at the de Young museum in San Francisco offers an expansive view of his work during his Berkeley years in the 50s and 60s. What the de Young displays from its permanent collection is poor preparation for the diversity of work on display. We see his transition from abstraction to figuration vividly, with even the most clear cut of landscapes and portraits retaining the flatness and band-like qualities of his more abstract work. His palette is more subtle than I’d imagined as well, with great use of blue, blue-grey, yellow, and golden yellows in particular. His portraits evoke a powerful sense of Hopper’s alienated urban citizens and deserted scenes, but without the depth of field and realism of Hopper so that a tension with a more abstract rendering of space (the space of the canvas) contends with the rendering of social space. They also evoke, pointedly, Matisse, in color, form, composition and subject matter, but a similar avoidance of realism and an emphasis on tone or mood.
Most striking, to me, about his portraits is the absence of facial detai. Very few render faces in a recognizable way. Some have no features at all. The absence of this traditional focal point again pushes consideration toward the plane of the canvas and to the overall, haunting mood of the piece rather than evoke comparison/constrast with actual people or a model. There are exceptions but Diebenkorn manages to be both radical and traditional at the same time: offering what appear to be familiar scenes and compositions and then decomposing the familiarity into something more surprising, disconcerting, arresting and even disturbing. It is a show well worth seeing.

I have to confess: I had to be escorted out of the space dedicated to the Jolika Collection of New Guinea art in San Francisco’s de Young musuem.

Not for wrongdoing but because the spirits in that space possessed me.  And I hasten to add: as a film professor, author, and modest art collector, I have my feet on the ground.

On more than one occasion a piece in the collection has riveted me in place.  Energy passed between us and I could not move.  The first time it happened I could not pass out of the room on my own and asked a Pacific Islander, serving as a museum guard, to escort me. He did and I was able to leave. I told him what happened and said to him the space was extremely spiritual and he replied, “I know.”

To me, the Jolika Collection is the greatest treasure in the museum.  Not just for its stunning beauty and remarkable range but for its deeply spiritual quality as well. I have seen Maori pass through talking among themselves, in their native language, in what were clearly tones of awe.  I imagine many others have had comparable experiences but perhaps not the museum staff.

They plan to deacquisition significant pieces from the collection at auction to raise funds fofr the museum, which feels a bit like selling off your first born child to add another bedroom for future children.  How can a museum maintain its stature if it undercuts its own strengths with sales of great art?

Deacquisitioning any of this collection would be a huge loss and could easily imperil its unique qualities, aesthetic and spiritual. The auction date is set but there may be time to try to make reason, and spirit, prevail.